The Performance Racing Industry Trade Show for the second year in a row was held in Orlando, Florida. It is a great opportunity for people in the industry to walk around and meet the companies that we do business with on a daily basis. For me it is great way to put a face with a name.

We attended all three days and it is awesome to walk around with people who have the same passion for racing. A few of our sponsors were on display at the show. Swiss Trax, which just came on board this fall, was showing off their wonderful flooring.

Something that was huge for me was that I had the opportunity to not only meet Kenny Youngblood, but he colored in a picture that he had drawn. Mr. Youngblood is one of the most famous motorsports aritists in history. I have been a HUGE fan of his work, and it was a honor to finally be able to see a him in action. Our artist, Glenn Ferguson, came out to walk around with us and also had the opportunity to speak with him. That made my weekend.

Now it is time to get ready for Christmas. Cookie baking and Christmas shopping with the rest of America. I hope all of you have a great holiday. We are putting together a great racing schedule for 2007. Make sure you check back and see if I am coming to a town near you.

See ya,
Elaine
Posted by Unknown at 3:16 PM No comments:

This is sad, I am counting down the days until my next race already and it hasn't even been two full weeks. It is going to be a long off-season. I feel as if we just got the new Embry-Riddle car up and running, and we put her away already. Well I guess that is how it goes. We have been working on the Miss Ta Fire getting her ready to be put back in action. I am going to make some test laps in her the first part of next year, and then it is off to the races.

This week, I have getting things done for Christmas. We have our tree up and some Christmas lights up outside. We are going to attend the PRI show (Performance Racing Industry) which is held in Orlando, FL. It is only 20 minutes from our house, so it is easy for us to go every year. Now it is time for the business end of racing. That is the hard part. Give me a race car and I can put her down the track, meetings can be challenging.

Well I will let you know how the show goes and the race team sightings.

Check back next week.

Elaine
Posted by Unknown at 5:45 PM No comments: 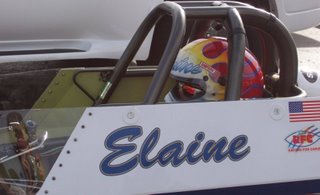 Bradenton Motorsports Parks Snowbird Nationals was the scene for the final race. For the past 3 years, this race has ended the racing season for the Larsen Motorsports Jet Racing Team. This race gets bigger and better every year!!! Chris took off first thing on Friday morning to drop the trailer. E. Lowe (crew chief) decided to take the weekend off from jet racing to do some bracket racing at the same race. It isn't often that he gets a weekend off to enjoy himself and race, so we were very excited to be able to watch him have fun this weekend.

I stayed home in order to do an interview, as well as allow Andrew to go to school. We couldn't take it knowing that everyone was at the track, and by 2:00 we were on the road. When I pulled into the track, I couldn't believe how packed it was, I am talking every inch of space on both sides was filled with racecars. We arrived just in time to watch Freddy Sibley make a test run in his new jet funny car. After we walked around and said Hi to the racers, and caught up on old times.

We headed out to dinner and then back to the hotel to get a good nights sleep for the big weekend ahead. Saturday morning and it was beautiful warm and sunny, not bad for December in Florida. We were lucky to have Chuck and Chris Foster fill in for E. Lowe to crew the car. We all arrived at the track and set up for the weekend. It was so much fun to be back at Bradenton Motorsports Park. There were several people who showed up with Miss Ta Fire shirts on (fans from the past 3 years), and others that took time to stop and say HI. 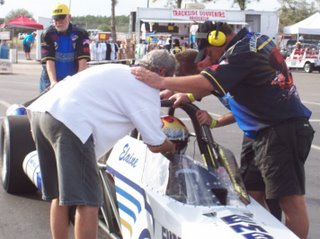 You know when you just know that it is going to be a good day?? Well I just had a great feeling about this weekend and it did not disappoint. The race track was busting at the seems with racecars and fans. The caliber of cars was amazing. We had several guests with us this weekend, our sponsor Glen Ferguson and JoAnn from Ferguson Racing Art and George DeWees from Embry-Riddle.

Okay now on to the racing...Saturday night we lined up and blasted down the quarter mile twice. The crowd went wild. It was so much fun. When the crowd gets into it, it really makes a difference. We hung out signing autographs for a couple of hours after the last pass of the night, and then headed to Applebees for dinner. It is kind of bitter sweet to know that this is the last race of the year. Moments with the crew like this are so much fun, just going over old times, and replaying the evening is why we do what we do. But it was getting late, and we had to get up early to race, so back to the hotel. 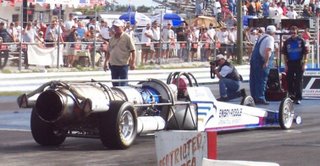 Sunday morning, and it is HOT!!! We pulled into the track and got ready for the last pass of the year. Great racing action, and then it was time for us to line up. Freddy and Paul had a staging duel and it got the fans excited. But when Mark and I pulled out on the track, there was no way we were going to let them have all of the fun. We had the burner pop war that got the fans on their feet!!! When we crossed the finish line and coasted to the end of the track it was a perfect way to end a GREAT 2006 season.

I want to thank everyone that has taken time to stop and say Hi this past year. It is what keeps us going from track to track. There are BIG things on the horizon for Larsen Motorsports. Hang on because 2007 is shaping to be an exciting ride.
Posted by Unknown at 6:16 PM 1 comment:

Promote Your Page Too